White Racism Matters! From Selma to Ferguson to Baltimore, the Mutating Virus of Racism

The Rev. Martin Luther King, Jr., famously once said that a riot is the language of the unheard.

But riot is partly a misnomer to describe what happened in recent weeks on the streets of Baltimore following Freddie Gray’s death in police custody. In fact, the rage on Baltimore’s streets was essentially an uprising against the deep poverty that afflicts the city.

This is not hyperbole. Spoken in the language of rocks and flames and with all the fury to be expected from communities permanently consigned to society’s margins, such violent street protests stand as a blunt rebuke of a socioeconomic system that has failed America’s urban minority communities.

Despite the bewilderment of CNN’s Wolf Blitzer and other media observers that such violent protests could actually occur in an American city, nothing that’s happened should come as a surprise. Many minority communities in the United States exist in a state of permanent economic depression. With its majority Black population, unemployment in Baltimore in 2013 among Black males in their early 20s was a staggering 37 percent. Nearly a quarter of the city’s residents live below the poverty line, with median household income half that of white residents.

Is it really necessary to repeat all the dire statistics? Indeed, is it even necessary to ponder the irony that only a few years ago the media was heralding Barack Obama’s 2008 presidential victory as the dawn of a new “post-racial” America? If anything, racism has been given a new lease on life since Obama’s election. For starters, there’s the irrational hatred of many white, right-wing Americans for the decidedly moderate Obama’s politics, a disdain fueled by a kind of visceral antipathy for the very notion of a Black person in the White House. But more than this the wave of recent anti-police brutality protests has provoked a backlash in certain quarters, revealing the oozing sludge of bigotry that in more quiescent times simmers just beneath the surface of some segments of “civilized” white society.

Social media is one barometer of this entrenched prejudice. Consider the YouTube video circulating in recent months claiming to show Ferguson, Missouri teenager Michael Brown engaged in an assault on another man. One link to this video (since removed) showed millions of viewers, titled “Michael Brown Criminally Assaults and Robs an Older Man,” and begins by describing what follows as “What Al Sharpton and Jesse Jackson Don’t Want You to See.”

The video shows a stocky young Black man physically assaulting an older man outside an apartment complex. It’s ugly to watch, as the older man can’t do much to defend himself. Too bad the video is from 2012, was filmed in Woodland, Texas, and the real Michael Brown is nowhere to be seen, as the Christian Science Monitor reports. This is only one of many slanders against Michael Brown that has gone viral in social media.

What’s telling about this is not so much the gullibility of those who take cheap slanders as good coin, but the fact that so many people apparently want to believe the lie. Why? Indeed, why would people who did not personally know Michael Brown or his family, whose entire knowledge of his shooting by a Ferguson police officer comes from news and social media, be so quick to believe this young man was a law-breaker who basically got what he deserved?

Some will say video footage taken shortly before Brown was killed that showed him stealing a box of cigarillos from a convenience store, pushing away a store employee who approached him, is evidence he was just another street thug who really did get what he deserved? In fact, no criminal incident at the convenience store was ever clearly established or proven, nor was Brown’s friend with him in the store that day ever charged with or as an accomplice to a crime. What is established is the racial context of the many efforts to disparage Brown. As widespread as petty shoplifting is, certainly the middle class white man or woman who pilfers items from Macy’s or Nordstrom’s or The Dollar Store is generally not labeled a “thug,” called an “animal” or otherwise considered fit to die. 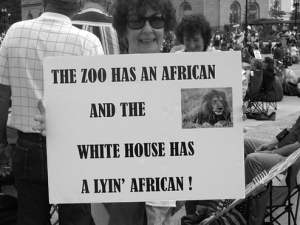 These days not too many white, middle-class suburbanites will openly complain about a Black person attending their local church or school. Nor are they inclined to defend the legacy of slavery or Jim Crow segregation. Instead of screaming, hate-filled white faces confronting the Selma marchers of 1965, we now encounter those who blithely counterpose “All Lives Matter” to the protest banner, “Black Lives Matter.” It’s as if even acknowledging the special persecution of the Black community constitutes some sort of special privilege unfair to whites.

This is the pathology of white racism, clueless to the end and teaching universal suspicion of minorities. The racial distrust runs so deep that often even success in life cannot overcome it. That’s what actor Rob Brown, who co-starred with Sean Connery in the film Finding Forrester and is featured in the HBO series “Treme,” discovered in 2013 when he purchased a $1,300 watch at Macy’s in New York City. Brown was arrested and searched by undercover cops who didn’t believe “someone like him” could afford such a purchase.

Like Michael Brown’s family, police chokehold victim Eric Garner’s survivors in New York City have had to endure similar affronts. The New York Post’s right-wing columnist Bob McManus referred to Garner, killed by police on a Staten Island street for selling loose cigarettes, as a “career petty criminal” who made the fatal mistake to “tragically resist” police. In other words, it was his own fault police had to kill him.

But there is the key word in all this—resist. What is unforgivable in the racist mind-set is when oppressed people make a decision to resist their oppression. Thus, if you’re Black and don’t want to get murdered by police, don’t look them in the eye, don’t tell them you’re not doing anything wrong and have no right to detain you, don’t object to being harassed on the street, and don’t even open your front door to police. All are circumstances that in recent times have caused unarmed, law-abiding Black citizens to be killed by police.

It was Leon Trotsky who once remarked that “the depth and strength of a human character are defined by its moral reserves. People reveal themselves completely only when they are thrown out of the customary conditions of their life, for only then do they have to fall back on their reserves.”

As individuals reveal themselves so too does a nation. What is being revealed now in the United States is how deeply entrenched is the racist frame of mind. Indeed, as the Black community has thrown off “the customary conditions” of their lives to express renewed opposition to discrimination, social neglect, and police violence, racist attitudes among sectors of the white public have been etched in even sharper relief.

But the news is hardly all negative. Actually, quite the opposite. As the Black Lives Matter movement gathers force and continues to grow, heralding a new era in the fight for civil rights and social justice, there is an education occurring in society. The enduring specter of racism is being increasingly exposed and challenged by a new, multi-racial generation of young anti-racist activists, for whom it is understood that social justice begins in the streets.

The message of this growing anti-racist movement is clear. A healthy democracy means an end to the police as a weapon of the privileged, as occupiers of minority communities and purveyors of racist violence. Democracy should mean community control of the police.

Anything less is a form of oppression.