Lou Reed: The Lights Are Out on the Mean Streets 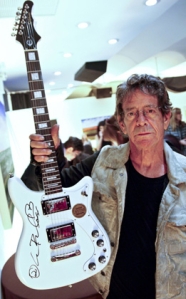 I saw Lou Reed perform only once. This was back in the mid-1970s at Chicago’s Auditorium Theater. A friend who worked at the Chicago Sun-Times found himself in possession of two complimentary tickets, courtesy of the paper’s music reviewer. Thus, we found ourselves one evening sitting somewhere in the first few rows, center section in that ornate old theater.

I mention how we got the tickets because at the time I knew little about Lou Reed, other than he was a name in rock music. I had heard “Sweet Jane” and “Walk on the Wild Side” and that was about it. I enjoyed the show, but it didn’t make me an instant fan. It was too unfamiliar. At the time I also found Reed’s vocal style somewhat underwhelming.

As the years passed Reed’s music gradually won me over. But only with the release of the masterful New York in 1989 did Reed enter my book as one of the musical greats. With the release of Magic and Loss in 1992, I realized Reed had entered that select group of artists whose new release I was automatically interested in.

Together, these two albums especially captured the range of Reed’s artistry, from the cutting cynicism of a man who knew the poor always got the short end of American justice to grimly tender reflections on the loss of friends to cancer, Reed showed us with raw, striped-down musical power the lights were out on the mean streets. And he let us see his pain and his love.

In a sense, Reed was one of those restless outcasts of post-war American culture, a rebel in flight from the suffocating, buttoned-down world of the middle class. It might be too much to claim he became some sort of voice for the voiceless, but his music captures much of the cynicism, alienation, and sometimes rage that thinking, feeling people experience trying to survive in modern capitalist society.

From Shock Therapy to Delmore Schwartz, an Artist Finds His Voice

For Reed, the struggle started early. At age 17, his conservative Long Island parents arranged to have him undergo electroconvulsive (ECT) therapy to cure his “homosexual desires.” If you’re wondering what he thought about that “healing experience,” he wrote a song about it, called “Kill Your Sons.”

“All your two-bit psychiatrists

are giving you electroshock

They said, they’d let you live at home with mom and dad

instead of mental hospitals

But every time you tried to read a book

you couldn’t get to page 17

‘Cause you forgot where you were

so you couldn’t even read.”

Unlike many of society’s various misfits, drug addicts, and other nonconformists, Reed was fortunate enough to find his way in music, making his living as a creative artist for decades. As a Syracuse University college student he credits poet and writer Delmore Schwartz with helping him find his path as an artist. Reed honored Schwartz with his own prose in the June 2012 issue of Poetry magazine, recalling affectionately memories of groups of students gathered around listening to Schwartz read and interpret James Joyce’s Finnegan’s Wake. “You were the greatest man I ever met,” wrote Reed. “You could capture the deepest emotions in the simplest language.”

At Syracuse Reed hosted a college radio show, got out of mandatory ROTC by reportedly holding an unloaded gun to his commanding officer’s head, smoked pot, and began to play in bands. There he also met Sterling Morrison, with whom he would eventually found the Velvet Underground. Later, under the influence of David Bowie and Andy Warhol’s New York art crowd, Reed cultivated the “glam rock” image as the urbane bi-sexual outsider, the hyper individualist who would do what he wanted. That included three years living with his transgendered girlfriend, Rachel. “Purely strange, a mother lode of unholy awe,” wrote rock essayist Lester Bangs at the time of Reed’s partner. “If the album ‘Berlin’ was melted down in a vat and reshaped into human form, it would be this creature.”

In those days outside of the gay community (and not necessarily even there), Bang’s crude prejudice was not that unusual a response. Transgender individuals were casually mocked not as a he or she, but some sort of “it,” freaks to be despised. Later, for whatever reasons, Reed gave up the glam, bisexual presence for straighter paths. He also reportedly never forgave Bangs for his odious writing.

Was the glam lifestyle just rock ‘n’ roll marketing, as Kim Nicolini suggests in her recent Counterpunch article on Reed? Maybe. Reed himself suggested as much at one point. Then again there were those shock treatments. But I’m with Nicolini’s take on Andy Warhol’s Factory scene in the late 1960s. What was coming off that assembly line were “a lot of elitist art snobs,” pretender “outsiders.” By the mid-70s Warhol himself, seeing dollar signs, had become a repulsive artistic jester to the courts of the world’s worst dictators, like the Shah of Iran and Philippines tyrant Ferdinand Marcos’ wife Imelda.

Indeed, the New York hipster art scene of that era with its in this world, but not of it mentality was ultimately pretty vacuous. Without a solid perspective on life or just rooted, intelligent instincts toward sympathy and justice, a sense of identity with the powerless and oppressed, irony only gets you so far. Think of the trajectory of Velvet Underground drummer Maureen Tucker’s emergence in recent years as another Tea Party wacko, convinced President Obama is leading the country to evil socialism.

Of course, it’s not as if being an ideological socialist will necessarily save you from moral ruin, either. Consider James Burnham, the NYU Trotskyist philosopher of the 1930s who ended up a rapid McCarthyite and publishing partner of William F. Buckley. President Reagan gave him the Presidential Medal of Freedom. Then there’s Delmore Schwartz compatriot Saul Bellow, another “youthful revolutionary” with talent who ended up an old right-wing sourpuss.

By comparison Lou Reed as man and musician at least stayed true to himself. He wasn’t a great political thinker, but he was on the side of social justice. He wasn’t a historic poet, but he wrote great songs and literate rock lyrics that stood out from the usual pop music banalities. With wife and musician Laurie Anderson he participated in the Occupy Wall Street protests in 2011. On Reed’s website you still can find a page of Occupy photos and news items he posted about police brutality toward Occupy protestors.

Then there is the short, sympathetic film he made with Ralph Gibson in 2010, “Red Shirley,” about his union activist, communist cousin Shirley Novick (shot on the eve of her 100th birthday). Ms. Novick was the wife of Paul Novick, the long-time editor of the Yiddish communist newspaper, Morgn Frayhayt.

Reed’s success in music made him well off. Unlike so many wealthy artists, however, his success never made him complacent and boring. He didn’t always make great music, but the fire and the spark were always there. At news of his death I imagine some people were surprised at the public outpouring of love and respect for Reed. After all, it’s not as if he played the large arenas or produced an endless string of popular hits. But perhaps Reed the artist touched a chord with many people for the same reason someone like Noam Chomsky, hardly the electrifying political speaker, attracts sell-out crowds at his lectures. His was an authentic voice, disciplined and original and unbowed by conventional wisdom and authority. He was just different.

In a culture of endless commercial fakery and public relations banalities masquerading as news and entertainment, Lou Reed never lost his integrity. He was a unique and passionate artist, a man who remained grounded in the creative power of rock ‘n’ roll to inspire and entertain and sometimes even push people to fight a little harder for what is right in this world.