The NSA, Edward Snowden, and the Threat to Democratic Rights

“In a time of universal deceit, telling the truth is a revolutionary act.”  —George Orwell 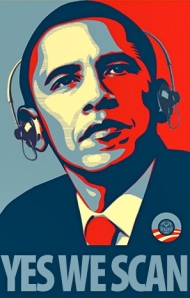 What is it about former liberal professors of Constitutional law that makes the Espionage Act so appealing?

The law gave the authorities of 100 years ago the power to prosecute any citizen who promoted “false statements or reports” considered damaging to U.S. involvement in the First World War. The Postmaster General even had the authority to block mail distribution of magazines and newspapers deemed detrimental to the war effort.

Under the Espionage Act, Socialist Party leaders like Eugene V. Debs, Kate Richards O’Hare and hundreds of others, including members of the Industrial Workers of the World (IWW), were indicted and many eventually imprisoned. For evidence prosecutors had only to rely on words spoken, such as Debs’ 1918 speech in Canton, Ohio denouncing the war and the persecution of dissenters. Only a small handful of actual sabotage conspiracies involved German foreign agents indicted under the Act.

Despite running for office in 2008 pledged to protect federal whistleblowers that expose fraud and abuse of authority in government, President Obama has done exactly the opposite. Whistleblowers specializing in national intelligence are not appreciated, thank you very much. Yet such is the twisted state of justice under this administration that U.S. Army private Bradley Manning and NSA contract worker Edward Snowden face potentially decades in prison for their groundbreaking roles in exposing government deceit and criminality.

Through Wikileaks, Manning, for example, is accused of exposing a 2007 incident in Iraq in which the crew of a U.S. Apache helicopter murdered 11 civilians on the ground, including two Reuters employees, then called in an airstrike to destroy evidence of what really happened. The U.S. military claimed those on the ground were killed by the airstrike. In April 2010 Wikileaks published a classified video of the incident, complete with audio documenting joking remarks by U.S. military personnel as they gunned people down.

The political consequences of exposing this cover-up was a factor in the Iraqi government’s decision against renewing an agreement granting American troops immunity from domestic prosecution or lawsuits. In fact, the Obama administration wanted to keep the 43,000 U.S. combat troops in the country beyond the original December 2011 withdrawal deadline. But lacking the legal immunity guarantee, the White House instead just declared victory and pulled out most of the troops. Maybe Bradley Manning should be given the Nobel Peace Prize for his part in this outcome?

Likewise, President Obama says he welcomes the debate on secret internet and data surveillance of private citizens. Yet there would be no debate were it not for the actions of Edward Snowden. Unfortunately, the White House has replied to Snowden’s act of whistleblower civil disobedience by charging him with espionage! Last week, the President attempted to downplay the embarrassment his administration has suffered because of the NSA story, remarking that he wasn’t going to be scrambling jets to go after a “29-year-old hacker.” Yet only days later the United States was obviously behind the international incident that forced Bolivian President Morales’ aircraft flying from Moscow to land in Austria. Suspected of having Snowden on the plane, allies France, Italy, and Spain had denied airspace rights to the Bolivian leader.

Daniel Ellsberg has said Snowden’s revelations about the extent of NSA surveillance rank as the most important leak of government documents in history. That might sound like hyperbole, but it is not. In many respects, society is only at the beginning of the electronic communications revolution that in recent decades has brought us personal computers, the Internet, smart phones, GPS technology, electronic banking, and other innovations. Snowden’s exposure of the secret U.S. surveillance state that has grown up with this technology proclaims before the whole world that the era of privacy is essentially over. Of course, news of NSA spying is not entirely new, but Snowden’s exposure of the extent of what has been going on is a historic revelation.

In the United States, the government now collects vast private data and information on not only Americans, but also much of the world. Other nations operate in similar fashion. Domestically, more targeted investigations are routinely initiated against hundreds of thousands of American citizens. The U.S. government says it takes a FISA court order before any of this meta-data trawling can be used for more enhanced spy operations on individuals. Take note: There is no record of the secret FISA court denying even one among the thousands of FISA court requests for enhanced surveillance of individuals.

As law professor Bill Quigley of Loyola University New Orleans College of Law wrote for Counterpunch, “In the last three years alone about 5000 requests have been granted for complete electronic surveillance authorized by the secret FISA court. The FBI has authorized another 50,000 surveillance operations with National Security Letters in the last three years. The government admits that well over 300,000 people have had their phone calls intercepted by state and federal wiretaps in the last year alone. More than 50,000 government requests for internet information are received each year as reported by internet providers.”

Thanks to Snowden, we now know NSA Director James Clapper deliberately lied to Congress earlier this year when he told senators the agency does not “wittingly” spy on Americans. Clapper later admitted he was searching for the “least untruthful” way to not answer the question. He has since amended that bad answer to an even worse answer. He says at the moment he just “forgot” about the Patriot Act’s authorization for mass data sweeps of email, phone, and internet records. Yet while Snowden has become the target of an international manhunt, apparently it’s much ado about nothing when a top government official lies to Congress. Has President Obama even expressed disappointment in Clapper’s “least untruthful” testimony?

In this changing world, government police operations have been quietly using increasingly sophisticated technology to run roughshod over the private lives of ordinary people, as well as corporations and foreign enemies and allies alike. Where will it all lead, as technological capacity grows? We’ve already caught a glimpse of the answer to that question. Consider in late 2011 when in city after city mostly Democratic city administrations moved in synchronized fashion to shut down Occupy Wall Street protests under almost identical pretexts of sudden concern for public safety and hygiene?

Thanks to Freedom of Information Act documents secured by the Partnership for Civil Justice Fund (PCJF), we know now the Department of Homeland Security functions (DHS) as essentially an American version of a secret political police. Indeed, it is a matter of policy for DHS to monitor peaceful, legal protests in the United States. With the Occupy protests, DHS used its authority to do more than monitor, but also coordinate with local police, city administrations, and the FBI a nationwide crackdown on the Occupy Wall Street movement. Indeed, from the first signs of activism the essentially peaceful Occupy movement was treated as a potential criminal and terrorist threat.

“These documents make clear that the shutdown of Occupy was not based on the supposed ‘health and safety’ concerns that law enforcement used as a public rationale, but rather that the decisions were profoundly political including a prioritization of business interests’ demands over First Amendment rights,” reports attorney Mara Verheyden-Hilliard, Executive Director of the PCJF on the group’s website.

Even in liberal Portland, Oregon where I live, there were days during the Occupy protests when you could see squads of heavily armed and armored Portland police riding through downtown in militarized vehicles, an intimidating presence to the right of assembly even when no altercations occurred. Flash bang grenades. Pepper spray. Batons. Tear gas. Mass arrests. Secret government surveillance of ordinary, law-abiding citizens. Welcome to the future. Or not.