“A Hole in the World: An American Boyhood” 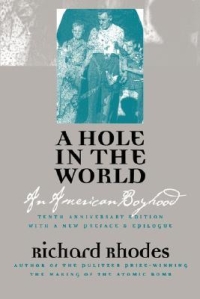 In the early years of the 20th Century, Albert Schweitzer was already a well-known European intellectual and concert musician when he decided to change his life and enroll in medical school. With his medical degree, Dr. Schweitzer would move to what was then French Equatorial Africa (now Gabon) where for many years he ran a local clinic and hospital.

Yet even as a physician, Schweitzer felt “sick and disheartened” at his uncertainty at life’s meaning. Once while on a long river voyage, he recalled pondering this ethical dilemma. As his boat made its way past a herd of hippos at sunset, the phrase “reverence for life” occurred to him. The simple measure of anyone’s contribution to the world, Schweitzer thought, could be taken in how they serve the cause of life and humanity.

As a way to explain his own efforts to find meaning and hope in life, writer Richard Rhodes shares Schweitzer’s story in his classic memoir, A Hole in the World: An American Boyhood. In Rhodes’s 1990 memoir such reverence for life was discovered not among the sunsets and hippos of Schweitzer’s African river, but out of the wreckage of an abused childhood on the Kansas plains. It’s a powerful, deeply moving exposition in which Rhodes excavates the tangled roots of his story out of emotional subsoil once fertile with wounds. The faith evoked is of the hard-won kind, gathered along the way and despite beginnings in which trust and certitude in an adult’s protective love —something every child needs and deserves—were barely evident.

Rhodes won the Pulitzer Prize in 1988 for his non-fiction book, The Making of the Atomic Bomb. Here he describes a different kind of explosion, one that began literally enough with his mother’s suicide by shotgun. The year was 1938 and Richard was thirteen months old. His first years were itinerant times marked by a widowed father and railroad work and a family always on the move. Richard and his older brother Stanley were swept along, looked after by a succession of neighbors and baby-sitters. In 1947, their father remarried, to a woman in her late 40s from Texas named Anne Martin. The story took another dark turn as the new stepmother descended upon the boys’ lives like the wicked witch of the Kansas plains.

The Beginning of a Nightmare

Rhodes writes: “Slashing us, kicking us, bashing our heads with a broom handle or a mop or the stiletto heel of a shoe, slashing our backs and the backs of our legs with the buckle of a belts, our stepmother exerted one kind of control over us, battery that was immediately coercive but intermittent and limited in effect.” The other kind of control was more lasting—the boys were starved, belittled, and forced to put up with bizarre rules like being forbidden to use the bathroom at night. Rhodes goes on to tell of the wounded adult he became, drinking too much and suffering long bouts of depression, anxiety, and an eating disorder.

As a writer, Rhodes is prodigious in his descriptive power. You learn what it was like to slaughter chickens, for example, or to toil in the fruit and vegetable gardens at the state school where he and his brother lived. Most important, you learn what it was like to live in close quarters with cruelty, casting about for a child’s hope. As well, how the author came to believe that “the child within me that I was trying to guard, the soul that my stepmother with my father’s complicity had tried to murder, could be protected and nurtured.”

A Hole in the World is inspirational, but hardly a Cinderella recovery story. Rhodes is candid about the anger he held onto for longer than was good for him. Despite years of therapy, he admits he drank nearly every day for thirty years, discovering in the bottle “cold, glittering darkness where I saw the world contemptuously for what I thought it really was, a blasted place, a mire of beasts contending.”

But then Rhodes quit drinking, abruptly. This happened in his late 40s. “One fine day I met a woman who needed me as much as I needed her,” he explains. “I realized one night a few weeks after I met her that I would lose her if I savaged her with the bitterness and contempt I spewed when I was binging. I stopped drinking then suddenly and entirely, with enthusiasm, all at once and on my own, gladly, after thirty years, and didn’t and don’t miss it in the least.”

Sometimes love will do that to you. Perhaps also the familiar comfort of the abyss had begun to lose some of its compulsive allure by then?

In his New York Times review, Russell Banks observed that Rhodes made sparse effort to discern the unconscious agendas of his father and stepmother. There is in the exposition indeed little sense of their inner life or what motivated them to act as they did. Thus, Banks’s desire to learn more is understandable. Instead the focus is on what they did to him, and what such neglect and cruelty did to him.

There is in Rhodes’ exposition a rugged honesty and indignation, and also a voice tempered by compassion. The latter is especially felt in the author’s desire to honor his brother Stanley, who emerges as the hero of the early days. He is one among a succession of human beings in the writer’s life whose love and generosity time and again save him from the “stark isolation” of his wounded soul.

Since its original publication A Hole in the World has rightfully come to be considered a classic in the genre of modern memoirs exploring the dark legacy of child abuse.

Certainly in the life of Richard Rhodes, writing became reverence for life.

“A Hole in the World: An American Boyhood,” by Richard Rhodes. University of Kansas Press. Tenth Anniversary Edition (April 2000). 288 pages.