On the Revolution’s Second Anniversary: Photos from Tahrir Square, Cairo

Here are photos taken in the last few hours by our friend Carl Finamore, a writer from San Francisco who is now at Tahrir Square in Cairo, Egypt.  On the second anniversary of the overthrow of the Mubarak dictatorship, Egyptians have returned to the streets to mark the mass uprising that toppled the old regime. As AlJazeera reports this morning, there is much opposition to President Morsi’s anti-democratic initiatives and opposition protesters continue to call for “Bread, Freedom, and Social Justice.” The situation is tense. The Interior Ministry has put the country on a high alert security status. As Carl notes, “Since 4am, Tahrir Square is engulfed with tear gas that has been lobbed by police keeping early arriving protestors away from the despised Interior Ministry just off Tahrir. Photo [top, left] is from medical infirmary right at the center. The very experienced youth warned me from rubbing my eyes and gave me cotton for my nostrils.”

Other photos: [top, right] A Christian Coptic jeweler and a Muslim engineer walking arm in arm, in solidarity. [bottom, left] “Broken car doesn’t go anywhere, like our broken government,” says (L) a retired Cairo magazine editor and Nader, who works with independent unions and the AFL-CIO-supported Soldarity Center. [bottom, right] A protester holds a tear gas canister, made in USA. 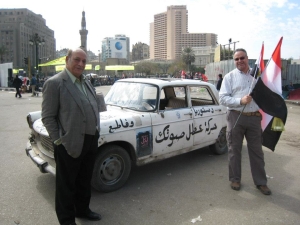