We’re Here, We’re Protesting, Get Used To It 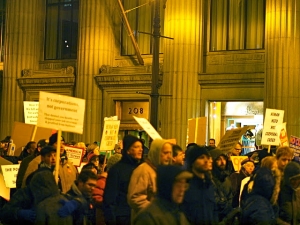 There is a new kind of democracy at work in the Occupy Wall Street movement. It’s the kind that doesn’t involve asking for permission to exist from the political establishment. Instead many thousands of Americans have taken to the streets, often for the first time in their lives. They’ve risked arrest, been subject to harassment and hostility. They’ve made the point that they’ve had it with the Wall Street elite controlling the show. They’ve also won the hearts of millions of sympathetic citizens.

The mobilized youth and others involved in the Occupy movement are discovering the liberating sense of their own social power, of solidarity in action, and how much fear this induces in the corporate small minds who want to control everything. Most important, they’re seizing back a sense of hope for the country’s future.

In a few short weeks the Occupy protests have changed the national dialogue. If the political establishment had its way, we’d all still be wringing our hands over the “painful necessity” of the deficit reduction debate. That debate is essentially over how far and how fast to cut social programs, with some quibbling thrown in over whether to tax the 1% a few percentage points less or more. That agenda remains a bipartisan priority. But now, as 2011 comes to a close, there is a shift in the electioneering noise coming from the White House. The issues of income inequality, social justice, and jobs are on the national mind.

Damn Those Dirty Hippies!
The new democracy of the Occupy movement is evident in subtler ways, too. We see it in the human microphone system in use at general assemblies, which is more than just a way to compensate for lack of electronic broadcast equipment. There’s an implicit sense of democratic engagement in this method of communicating, as those assembled repeat the speaker’s words for others to hear. The message is, “We’re actively engaged in wanting to hear you.” The new democracy is also evident in the way some celebrity artists and other names have participated in the protest encampments, without the usual pretense. The support expressed for the protests by other well-known names not normally identified with politics (e.g., Russell Crowe, Russell Brand, Miley Cyrus, David Letterman, Katy Perry) also testifies to the movement’s broad impact.

Of course, there are the others, such as comic book artist Frank Miller, known for the stories (and films) “300,” “Sin City,” and “Batman: the Dark Knight.” Miller calls Occupy protesters a “pack of louts, thieves, and rapists.”

Nice. At least his vitriolic rant earned a proper rebuke from Alan Moore, author of the “Watchmen” and “V for Vendetta” graphic stories and also successful films. Moore says Miller’s ugly rant comes as little surprise, considering the homophobia and misogyny evident in his work. Moore, whose “V for Vendetta” inspired the “V” masks associated with the Occupy movement, believes the protests are a “completely justified howl of moral outrage.” It’s just “ordinary people reclaiming rights which should always have been theirs.”

This new democracy at work takes getting used to. Weaned on decades of relative social quiescence, some otherwise educated types don’t quite know what to make of things. On his HNN talk show, Dr. Drew Pinksy said he was “confused” by the police pepper spray attack on UC Davis students. He didn’t support the police action, he explained, but he did question why students expressed surprise “there were consequences for their actions.”

Actually, UC Davis protestors were less surprised than just outraged (along with much of the public) at the pepper spray incident. The student occupiers obviously knew they risked arrest for their nonviolent refusal to disperse. So what exactly is Dr. Drew, who considers himself an expert in understanding human emotions, saying? Do the legal consequences of civil disobedience now equate with placidly accepting the inevitability of police brutality?

At least this celebrity psychiatrist expresses some sympathy for the students, which is more than you can say for his former “Loveline” radio show co-host, comedian Adam Carrolla. The latter’s towering intellectual might was recently on display in a public diatribe on Occupy protesters as “self-entitled monsters.”

In Carrolla’s jaded world, Economics 101 apparently involves understanding that social inequality is simply the result of some people working harder or being more talented than others. No word yet from Carrolla on why so many recent college graduates with excellent grade point averages can’t find decent jobs. Perhaps being super-talented and hardworking, Carrolla will in the near future unveil some innovative new plan for paying off the massive student debts that afflict this underemployed generation.

We Support You, Now Get Lost!
Of course, the views of Miller/Carrolla et al are ultimately inconsequential, testifying only to the inability of some people to understand the larger social world around them. Far more telling is the inability of the political establishment to answer in any meaningful way the dissent embodied in the Occupy movement.

From the Republicans has come nothing but the usual dreary insults and nonsense, capsulized in Republican front-runner Newt Gingrich’s “go get a job, right after you take a bath” response to Occupy protestors. You would think in the 40 years since the “dirty hippie” argument was first batted around, Gingrich and his crowd could come up with something new to say.

But the Democrats are not much better. In fact, in some ways they are worse. For it has been largely liberal Democratic mayors across the country who have turned to the armed might of the state to shut down the protest encampments. The fact they sometimes do so with a nod of sympathy to the “ideals” of the Occupy movement, while feigning sudden, urgent concern for public safety and hygiene in cities whose social services infrastructures are long deteriorating, only exacerbates the moment’s irony.

The hypocrisy is at times nauseating. In Los Angeles, after some 1,400 riot police were recently mobilized to arrest or drive off roughly 200 Occupy LA supporters, many of whom were subject to hours of police mistreatment, Mayor Villaraigosa had the audacity to praise the police repression as one of “LAPD’s finest hours.”

The sweeping police attacks on Occupy protests have all the earmarks of a coordinated national shutdown of free speech. Tellingly, the United Nations envoy for freedom of expression drafted an official communication to the U.S. government asking why the federal government is not protecting the rights of Occupy demonstrators from local authorities.

Ironically, only a few months ago President Obama was for the record chiding dictators in Egypt, Tunisia, and elsewhere in the region to respect the human rights of protestors. Yet here at home the White House has said nothing about police brutality incidents or the clampdown on freedom of assembly, other than to describe them as “local issues” inappropriate for the President to comment on.

The Occupy Wall Street protests have America’s rulers worried. They seem to have few real answers to the desperate situation of so many people, other than stupid insults (Republicans), slick platitudes (Democrats), and police in riot gear.

Commenting on the police harassment of occupy camps, British musician Brian Eno, visiting Zuccotti Park in New York in November with fellow artist Laurie Anderson, remarked, “It’s all done to discourage people, to wear people down so it just becomes too annoying to carry on.” It’s unlikely the harassment will work. Those who have tasted the power of the streets are talking truth not so much to power as to each other. In doing so they are discovering a sense of their own power, to remake politics and society. Such experience bodes well for the future.

The recent police attacks on Occupy encampments signify not an end to the movement, only a necessary regroupment. Already the occupy idea is spreading to direct action on home foreclosures. Is it only a matter of time now before the long battered American labor movement begins to move in new, far more powerful ways? Is an Occupy the Workplace movement the next stage in this new era of social protest?

The Occupy Wall Street movement is very much what democracy looks like. It’s all at once a messy, bold, engaging, creative, and empowering challenge to the political establishment, to business as usual. This is democracy from the ground up, political idealism translated into the rebuke of the streets. This, in the end, is a movement for a better, more just world, one more and more people are concluding cannot be built within the rotting edifice of the existing political establishment.

This is only the beginning.