Is Capitalism Losing the Debate? 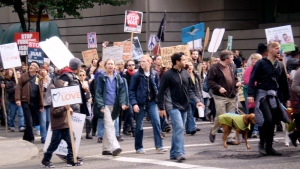 A remarkable shift in mass public opinion is occurring right before our eyes. It does not happen often. Normally, only when there is a severe breakdown in public confidence about the future. Now is such a time.

Fox News pundits, Heritage Foundation business scholars, glib rightwing loud mouths and two-faced politicians from both major parties have been exposed as stand-in ventriloquists for the wealthy—shockingly, all in a few short weeks.

It all began with only a few hundred protestors camped out on Wall Street challenging conceited notions of the one percent.

Through it all, the Occupy Movement is discovering what my generation learned during the civil rights, antiwar, feminist and gay rights struggles begun some 65 years ago—the ideas of the rich and powerful just don’t stand up. They don’t hold water. That is, they do not accurately explain what is happening around us, the measure most rational people use to determine if something is true or false.

There was bitter political conflict with the status quo during the conformist “American Dream” decade of the 1950s.

Fundamental rights of equality were denied and numerous US military interventions into Central America and Asia were excused by a conservative, misinformed and compliant American population.

Eventually, it all turned around.

How did this happen? Simple, false assumptions of the dominant powers in this country were challenged and examined. There was a conversation in almost every American household. Some were hotly contested with families torn apart.

Historical hindsight confirms the best reform proposals in American history have come from socially conscious mass movements. They have not come from traditional leaders positioned inside the political machinery that has so consistently and miserably failed us.

So it was in my days as a young activist.

The massively extensive political dialogue that broke out in this country changed America.

For a precious few years, the lives of national minorities, women and gays actually improved and, significantly, lives were also saved as it became more difficult for the United States to invade countries using illegitimate pretexts and lies.

Extensive political debate can have a greater impact today because the economic and social crisis is deeper. Again, we have an opportunity to change our country and the world.

Ideas, Like Rivers, Do Not Flow Backward
The first collective statement from the original Occupy Wall Street encampment is an extremely damning indictment of corporate America: “We come to you at a time when corporations, which place profit over people, self-interest over justice, and oppression over equality, run our governments. We have peaceably assembled here, as is our right, to let these facts be known.”

In response, there has been no serious attempt by the establishment to engage in authentic dialogue or in spirited defense of their policies. On the contrary, authorities have responded by letting loose riot police, spewing slander and unsuccessfully trying to change the subject by complaining about loud drum noise and unsanitary conditions.

Really, it is quite a lame and ineffectual response coming as it is from the most boastful and arrogant power in the world that only a few years ago gloated about the triumph of American free-enterprise over the Soviet Union.

For a while, another “American Century” was trumpeted.

How quickly it has all imploded, not just their system but their self confidence; and not just for U.S. rulers but for their cronies across the world as in Tunisia, Egypt, Spain, Italy and Greece.

In fact, many of the protestors’ claims are now considered valid by most Americans. Even the corporate-controlled media has acknowledged alarming facets of corporate control they previously ignored such as the vast gap in wealth.

For the first time in decades, political, economic and social ideas are being reviewed more closely by millions of working people.

The rich and powerful retain control of the U.S. economy, that’s for sure, but they have been embarrassed off the public stage where the Occupy Movement holds the world’s attention. It’s laughable and also quite revealing that Governor Rick Perry doesn’t want to debate anymore because he complains he just gets ridiculed.

Millions are fed up with the steady diet of distortions concealing an infinitesimally small group of super-wealthy financiers steering our economy into a ditch.

Occupy the Economy
Radicals have long accused capitalist western democracies of being phony by asserting real democracy is impossible while a small minority runs the economy.

Now, even this radical idea too is being seriously discussed.

For example, talented documentarian Michael Moore, a self-described liberal and supporter of President Obama, proclaimed to thunderous applause at a recent Oakland, California rally that real change will only come when the 99 percent “begins to Occupy the Economy.”

Yes, it is true that the Occupy Movement has not precisely defined what that means nor have they coalesced around a common set of solutions. But, really, at this early stage, how could it be otherwise? In fact, why should it be otherwise while the movement is still growing and developing its legs?

The really momentous accomplishment is that a mass political discussion is occurring throughout America, kept alive by regular actions of the Occupy Movement.

Eventually, adoption of various programs and demands will have to be considered and nobody has the unrealistic expectation that divisions will not appear.

But we should expect, and actually firmly insist, that differences not deter us from continuing to act together against common symbols of greed and injustice and in vigorous defense of civil liberties.

Let discussion on America’s future ensue in every home, workplace and community as the movement continues to mobilize and as it begins to refine its goals and objectives.

Carl Finamore is Air Transport Employees Local Lodge 1781, IAMAW, delegate to the San Francisco Labor Council, AFL-CIO. He can be reached at local1781@yahoo.com and his other writings seen on carlfinamore.wordpress.com.