By Mark T. Harris in Health Care on March 22, 2014December 28, 2014
No comments
Here’s a story I wrote in 2009 for Common Dreams on the fine work of a group of Oregon doctors who support single-payer health care. I’m reposting it along with a few other articles I’ve written on the health care topic in recent years. Unfortunately, the issues and problems discussed here remain relevant, despite passage of the Affordable Care Act. As I wrote then and still believe, we cannot solve the problem of providing full access to actually affordable care as long as the for-profit insurance industry is involved in health care delivery. 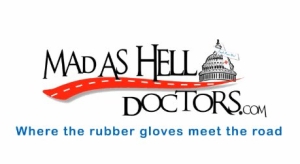 Single-Payer, Yes, Public Option, No
“I am not the first person to take up the cause of health care but I am determined to be the last,” President Obama declared to great applause in his recent speech before Congress.

It was a stirring moment, but in the end perhaps just one more ephemeral moment on the stage of what passes now for political drama in the United States. Whatever results from the final health care legislation passed by Congress, we can be sure it will not come close to solving the health care crisis. The cause of health care, post-Obama, will go on.

That’s the message of the “Mad as Hell Doctors” for single-payer, an intrepid troop of Oregon physicians now on a three-week national road tour fueled by a Winnebago and the energy of boisterous supporters at every stop. They’re on their way to Washington, D.C. where they’ll rally on Sept. 30 and ask to meet with the President to discuss the merits of single-payer.

It’s unlikely the group has any high hopes to win Obama back to the single-payer cause he once formally supported. Actually, it’s unlikely Obama will even meet with the group. The White House has not exactly objected to the efforts of Sen. Max Baucus (D-Mont.) and others in Congress to shut single-payer advocates out of the debate.

The Mad as Hell Doctors serve as a counterpoint to everything wrong with the current health care reform debate. “What we’re mad about is actually not health care,” said group spokesperson Dr. Paul Hochfeld recently on MSNBC’s The Ed Show with Ed Schultz. “What we’re mad about is that the industry has once again manipulated the political process for profits instead of health.”

The emergency room doctor from Corvallis, Oregon suggests even Obama may not have grasped the insurance industry’s power before taking office. But if the President now finds himself a political victim of an industry whose profits are bought at the price of a society of victims, he has also not shown the requisite courage to take on the industry’s real power.

Indeed, health care reform ought be the last issue the right wing is able to exploit. Not when tens of millions are without insurance, while almost everyone else faces derisory coverage with exorbitant premiums and out-of-pocket costs. A dismal economy has only aggravated this sorry state of affairs.

Yet thanks to Democratic efforts to limit and complicate health care reform, the right has turned an unassailable moral imperative for social justice into a stupid, noisy uproar over “death panels” and other nonsense. Meanwhile, many progressive supporters of health reform have been reduced to saying their prayers that some form of “public option” plan at least makes it through Congress.

Unlike many liberals, the Mad as Hell Doctors doubt a government-run public option will amount to much. “This is how we’re doing to fix healthcare [with the public option]?” ask Hochfeld. “We’re going to mandate that everybody in the country that doesn’t have health insurance buy a commercial product that’s flawed. If you can’t afford it, we’ll make you pay slightly more than you can comfortably afford and the taxpayer will pay the difference. If you get your insurance through your employer, then you won’t qualify for the public option. That’s ‘fixing’ health care?”

As Hochfeld also reminded MSNBC viewers, employed people tend to be healthier than unemployed people. Thus, it’s likely under a mixed public-private system that the public plan will gradually morph into a mechanism for insurers to transfer the most burdensome patients onto the public system. The healthier, wealthier, and more profitable individuals will remain disproportionately represented in the private system.

In an interview with the San Francisco Chronicle, (Sept. 18, 2009), filmmaker Michael Moore makes the observation that no one should be surprised by the dispirited turn health care reform (now called insurance reform) has taken. “If you start, right off the bat, compromising, don’t be surprised if (Obama) is going to keep compromising,” notes Moore.

It didn’t have to be. A New York Times/CBS News Poll earlier this year found 59 percent of Americans in favor of government national health insurance, with 49 percent saying such insurance should cover all medical problems. Other polls show even greater support for the single-payer concept.

Instead of mobilizing this base, the President has conducted himself as if the most important concern in the health debate is bi-partisan agreement with the opponents of reform. Apparently, Obama feels constrained to keep the Republican valets of the health insurance status quo in the loop for whatever change happens. Other than to perhaps prove what a reasonable man the President is, the question to be asked is just: Why?

Indeed, what kind of productive agreement is possible with people whose motto is no, no, and no to reform? Actually, it’s not so much that the President necessarily cares about Republican support. But he does accept the entrenched economic power of the health insurance industry as here to stay. And the Republicans cravenly represent the latter.

If Obama truly wants to be the leader of historic change in health care, he should call for a mass grassroots activist campaign to demand insurance companies out of health care. He did once say that single-payer was probably the best system, if we had the luxury of starting from scratch. But is it really a “luxury” to try to make the system right by tackling the root of what’s wrong?

Unfortunately, while the crazed right screams about Obama’s “Marxist” mission to dispense Grandma to the gulags for some “end of life” counseling, the millions of voters once galvanized by his run for the Presidency have not mobilized with anywhere near equal passion.

It’s not hard to grasp why. “He’s only going halfway with this public option,” Moore tells the Chronicle. “He needs to remove the private, profit-making insurance companies from the table.” But here the deeper reality of the political status quo emerges. When was the last time a Democratic President did anything to promote grassroots mass action for a progressive cause, at least when it didn’t involve their own election?

The Mad as Hell Doctors remind us that the fight for health care reform isn’t really over whether private insurance is more or less good or bad in taking care of people’s health care needs. It isn’t over whether premiums are too high; or there are too many co-pays or policy exclusions. It certainly isn’t about anything the Republicans say it’s about.

This is a battle for the way we define ourselves as a nation. Will we be a society guided by a sense of compassion and justice, in which our every medical resource is devoted to the well being of the people? Or will we be a society in which in the end money trumps justice, and people suffer and even die because it’s just more important to let the profiteers keep their good thing going?

We need to guarantee every American the right to the best care possible, regardless of their income. That means private health insurance companies out of the picture. That means single-payer into the picture. And, as the example of the Mad as Hell Doctors teaches us, that also means a new, long-term commitment to grassroots activism for health care justice.

Mark T. Harris attended the Sept. 8 send-off rally for the Mad as Hell Doctors at Portland’s Pioneer Square and he’s been rooting for them ever since. Harris is a former senior editor for the Joint Commission on Accreditation of Healthcare Organizations.
Published on Wednesday, September 30, 2009 by CommonDreams.org